After a cloudy and humid Saturday afternoon in Sanford Stadium, the third-ranked Georgia Bulldogs recorded their first shutout of the 2019 season. Behind quarterback Jake Fromm’s 279 yards and three touchdowns, Georgia wiped out the Arkansas State Red Wolves, 55-0.

Within the first three minutes of the game, the Bulldogs had a successful first drive as senior tailback, Brian Herrien ran for 19 yards to Arkansas State’s 3-yard line —– getting him into the endzone on the next play for Georgia’s first score of the game. The Bulldogs have scored on all opening drives so far this season.

The first quarter set the tone for the rest of the game, as the Georgia defense held Arkansas State’s offense to just 11 yards and one first down. For the next three quarters, the Red Wolves couldn’t find a groove on either side of the ball. They were held to 220 yards of total offense and reached the red-zone just one time during the full 60 minutes. For the third straight game, Georgia held it’s opponent to under 300 yards of total offense. 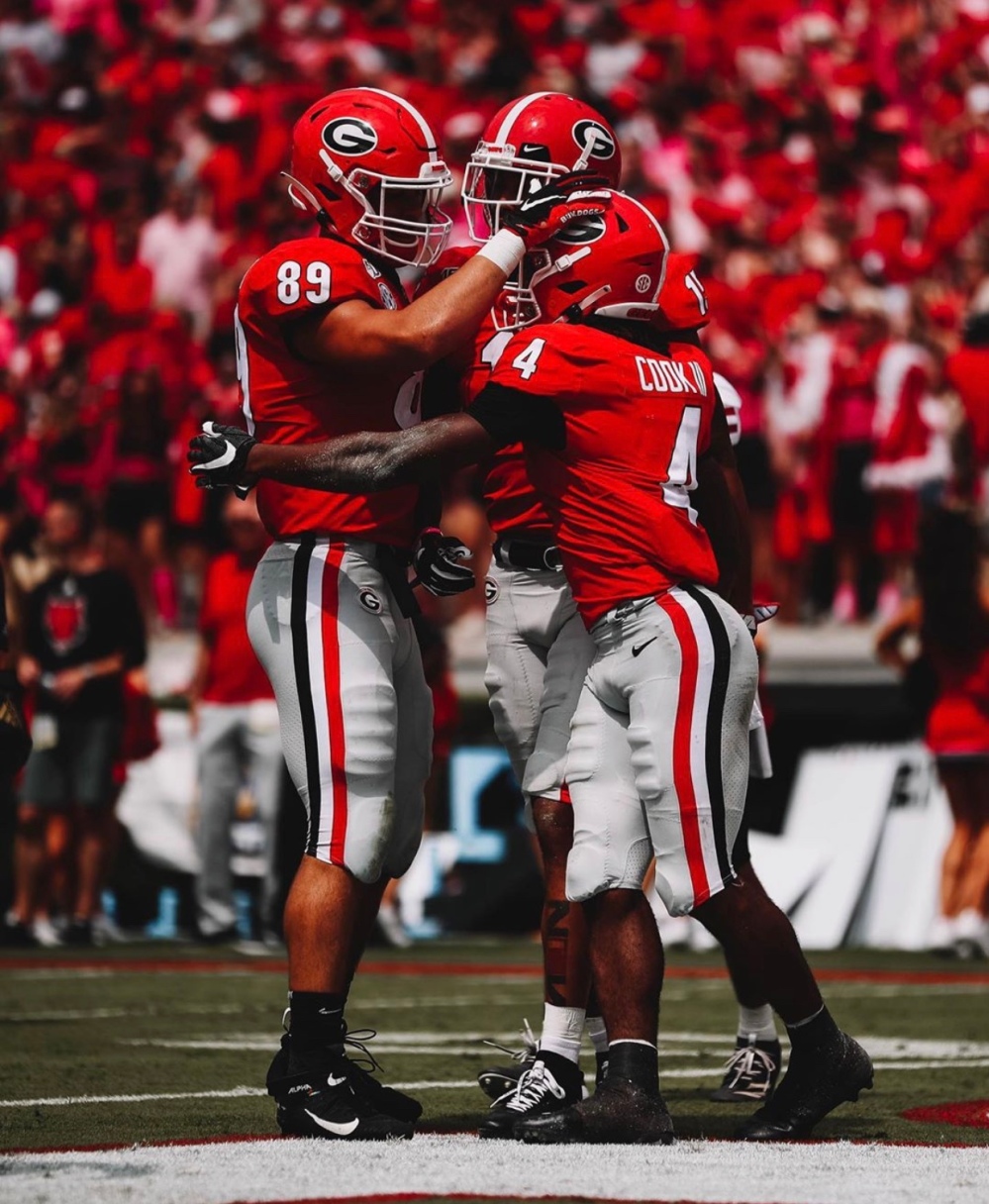 Georgia’s head coach Kirby Smart expected the Red Wolves to run the ball much more efficiently than they did. He credits his defense for Arkansas State’s low productively in the back and open field.

“We played more physical upfront. The front played well and the linebackers added in and did some things to create problems for them.” Smart said. “ We controlled the line of scrimmage.”

Georgia’s defense was led by DT Tyler Clark and OLB Robert Beal Jr., who each recorded 5 total tackles and Clark who had a couple of sacks. Sophomore DB Tyson Campbell made some noise on defense early in the game before exiting prior to halftime with a right foot injury.

There was nothing the Red Wolves could do to keep up with Georgia’s talented running and receiving core. Georgia scored 34 points before entering the locker room at halftime. The Bulldogs completed the day with 656 yards of total offense (5th best in school history) on 66 plays.

Fromm completed 77 percent of his passes and connected with freshman WR Dominick Blaylock for his longest pass, a 60-yard touchdown to begin the second half. Blaylock led all receivers in yards with 112 and snagging four. Freshman receiver George Pickens also made a name for himself with an impressive performance as he tallied up five receptions for 84 yards.

Leading the team in rushing was junior, D’andre Swift with nine carries for 76 yards. Swift made some plays in the air with a career-long 48-yard catch into the end zone. That makes it the fifth receiving touchdown of his career. James Cook had an opportunity to show his skills on the ground and posted a career-long 37-yard touchdown run in the third quarter. He finished the day with 51 yards on three carries.

The offense dominated in the trenches from start to finish and Jake Fromm made sure to give his big guys their recognition.

For the first time in school history, Notre Dame will travel to Athens for a top-ten matchup between the hedges with the Bulldogs at 8 p.m. on Sep. 21.

“We have a lot of preparation to do to get ready for the game but as far as the stage, the biggest thing you can do is let your players relax and play,” Smart said. “The team that makes the fewest mistakes will usually win that game. The team that over analyzes it, makes it bigger than it is and sometimes that can get you in trouble. We’ve played in a lot of big games, we got a lot of kids in that room that have played in big football games. They aren’t going to be intimidated by that.”