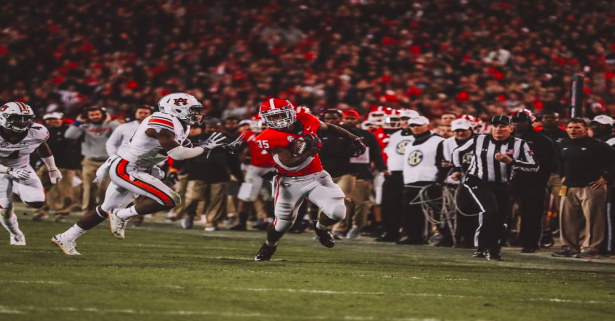 After an extremely long four weeks, Georgia fans gathered into well-beloved Sanford Stadium for Saturday in Athens. It wasn’t just any Saturday either, it was the 123rd edition of the deep south oldest football rivalry between the Bulldogs and the Auburn Tigers.
Does not matter how good or bad a team is, rivalry games are never easy. Auburn had the Dawgs in the first half, not gonna lie. The Tigers took a 7-3 lead on an option pass with 4 minutes remaining in the first quarter after freshman running back, JaTarvious Whitlow threw a 9-yard touchdown pass to tight end, John Shenker.

Luckily, the Georgia defense stiffened and came up big only allowing a field goal after Auburn made their way down the field to the UGA 4-yard line on an 11-play drive.

After taking a 10-6 lead with 7:46 remaining in the second quarter, Auburn could not find a way to get back on the scoreboard as they were completely shut out for the rest of the game. It was nothing but punts for Auburn in the 2nd half, a sight Georgia fans loved to see. Leading the team with 8 tackles was sophomore inside linebacker Monty Rice along with a half stop for a loss.

Holding Auburn to 274 total yards the Bulldogs ran away with a 27-10 win over the borderline rival, and when I say ran I mean they literally bulldoze over them.

It’s quite evident what the power run can do when you have two elite running backs in the backfield. Auburn’s defense was completely tormented as D’Andre Swift and Elijah Holyfield displayed another dominant performance rushing for a combined total of 279 yards on 32 carries.

Fiery tailback, Swift on his own rushed for a career-high of 186 yards on 17 carries showing off his speed and strength on a 77-yard run in the brightly lit fourth quarter. Even when there’s just a small amount of space in between tackles you best believe that guy will cut through, break some ankles and gain some big yards.

Not only were there a couple of big plays on the ground but through the air as well. Mecole Hardman Jr. gave the Bulldogs some breathing room after a 41-yard kickoff return to their own 41-yard line. Jake Fromm alongside the dynamic duo, Holyfield and Swift took over from there leading the Bulldogs down the field in 8 plays for 59 yards. On a 3rd and 4, Fromm connected with the junior receiver, Tyler Simmons for a 14-yard touchdown with 2:47 left in the 2nd leading 13-10 after a Blankenship’s PAT.

It was a special score for Simmons as it was his first career touchdown reception. Offensive coordinator Jim Chaney called a gutsy but smart, well-designed play on 4th and 3 to close the first half as Jake Fromm found a wide-open Terry Godwin on a slant route for a 38-yard touchdown. This pushed the Dawgs to take a double digit 20-10 lead going into halftime.

The Bulldogs had a chance to add to their passing yards on a fake field goal attempt, but failed as Blankenship pass to Isaac Nauta went incomplete. Overall, the Georgia offense did some damage racking up a total of 516 yards. Quarterback, Jake Fromm did his thing completing 65 percent of his passes, throwing for 193 yards, 2 touchdowns, and one interception. Georgia fans hearts lucked out as this game wasn’t quite the same result as last season. Thankfully, nobody’s anxiety levels flew through the roof as far as I know or at least from a Bulldog perspective.

Georgia now leads the rivalry series 59-56-8 against the Tigers. War damn dawgs, am I right?

The Bulldogs finish 7-1 in conference play and close out the regular season at home against UMass and state rival Georgia Tech. UGA needs to finish strong, play hard and leave no room for error as their biggest challenge lies ahead in Atlanta on Dec. 1.