Athens, Ga– Patients who utilize the community clinic located in the University of Georgia Psychology Building are encountering a consistent problem when they arrive on campus for their appointments.

They often don’t have anywhere to park.

Parking spots for those attending the clinic are in short supply as there are only 13 available. On days where patient traffic is heavy these spots are at a premium already; and too often the spaces are occupied by illegal parkers.

Parking on campus at UGA is pretty strict and there are no areas for free parking during daytime hours. This doesn’t prevent people from trying their luck though.

In observing the parking lot next to the building (lot N09) there are vehicles illegally parked in the patient spots every single day. A parking services official, who asked to remain anonymous, said it’s typically the same cars every time. 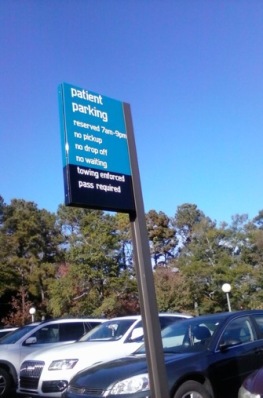 “That one over there has a long rap sheet,” she said pointing at a black SUV that had just received yet another ticket. According to her tickets are $100 a piece but that doesn’t seem to be enough to deter the rule breakers.

The aforementioned SUV has been ticketed constantly but the driver doesn’t appear to be bothered by it. I once witnessed said driver pick up a ticket off the windshield, toss it on the ground and drive off.

The driver is a student-athlete and based off my own observations student-athletes are notorious for parking illegally in lot N09. Conveniently for them though their parking tickets are handled by the university as part of their full-ride benefits at UGA.

The parking official explained that they have run into situations where all of the patient spots were taken by non-patients. The N09 lot is patrolled daily in an effort to correct the issue.

The signs in front of the parking spaces emphasize that towing is enforced. Despite the warnings no cars have been towed, at least for this semester.

I attempted to reach out to UGA Parking Services to inquire about what could be done to multiple offenders but no response was ever given.

Until further action is taken this problem will certainly continue.