Recently, Lonzo Ball achieved his first triple-double in a 90-98 loss to the Milwaukee Bucks. He dropped 19 points, 11 rebounds and 13 assists. The big storyline there was  not only was this his first one but that he was the youngest player to notch the triple-double in NBA history.

However, the feat of his achievement doesn’t overshadow the fact that 14 games into the season, he’s had a hard time finding his way around the rim. With a new lineup of rookies on 32 different teams, all eyes are on him: the Los Angeles Lakers No. 2 pick.

Lonzo Ball, former UCLA guard, was chosen to lead the yellow and purple into a new era.   President of Basketball Operations Magic Johnson, equipped him with Kyle Kuzma in the draft and Kentavious Caldwell-Pope and Brooke Lopez in some offseason moves to assist in leading the Lakers into a more successful season than the past or into a hopeful playoff spot in an already crowded Western Conference.

In His Past Life

Although he spent just one year in college, Ball looked like a man amongst boys with his on-the-court IQ. He was more known for getting the ball into the hands of an open teammate for a smooth two- or three-pointer and he scored when needed.

In 36 games, the 6’6″ guard averaged 14.6 points and 7.6 assists on 55.1 percent shooting. Fans, scouts and analysts saw a different kind of ball player than those surrounding him, despite his awkward shooting technique.

Fast forward to opening night of the season where the Lakers take on the Los Angeles Clippers. Patrick Beverly took on the task of guarding the rookie and keep him “in check”. That he did. Beverly held Ball to three points on 1-for-6 shooting in the 92-108 loss. One would say this game could be thrown out among the 12 that he’s played, to see just how good he was, due to the unconventional style of defense Beverly delivered. 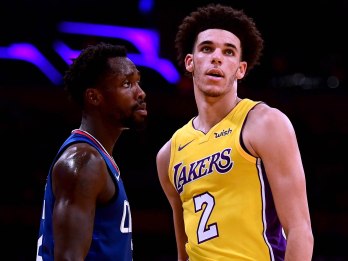 His next one, however, was a little more like the UCLA Ball we were accustomed to. The Lakers played the Phoenix Suns the next day on a back-to-back. The 20-year-old came in with a different mindset after talking with his father, Lavar Ball.

Ball dropped 29 points, 11 rebounds and nine assists on 12-27 shooting. An apparent improvement from the previous game and had people sure that this was the guy that was going to be the next face of the NBA. Praise and accolades rained down on him as he guided his team to a 132-130 win.

Unfortunately, we haven’t seen that Lonzo Ball again. Last Thursday, the Lakers went head-to-head with John Wall and the Washington Wizards again and lost 95-111. Again, he suffered from a poor shooting night going 3-of-12 from the field. The only upside is that he scored 10 points, his first time scoring double digits since their Halloween game against the Detroit Pistons where he tallied 13 points.

They took on the Phoenix Suns again on Monday, a game after his historic stat line, the drought continued and was so bad that head coach Luke Walton benched his starting guard. He was 3-for-10 for seven points in 28 minutes on the floor. He had five assists, five rebounds, two steals and four turnovers when he left the game for good with 2:47 left in the third quarter with the Suns up by four.

Although he’s been ghost in shooting as he’s averaging 9.5 points a game, he’s involved in other areas of the game to try and help his team out. For the season, he’s averaging 7.2 assists and 6.6 rebounds a game. That’s the good thing that the NBA has seen about Ball. He doesn’t get into a shooting rut and check out, he continues to involve his teammates to still work towards a win.

How does Lonzo feel?

“It’s in my head to be honest. I know I can shoot the ball,” the Anaheim, California native said, according to ESPN Jeff Goodman.

Lonzo Ball on his shooting struggles: “Its in my head to be honest. I know I can shoot the ball.” https://t.co/oRebZDt2XC

It seems reasonable that he’s trying to live up to the constant pressure to turn the Lakers franchise around and the “out of this world” expectations his dad has put on him.

But is it in his head? Or did he just get used to having superpowers amongst mortals in college? Now, he’s in a place where everybody has superpowers, with some having more or greater powers than him. The tables have turned and he is the boy amongst men. He is currently ranked last in the league in the paint with 34.4 percent and he’s second-last from outside the paint with 25 percent.

The pressure from the franchise, his dad and the other players in the league who are trying to prove that he’s not as good as he thinks he is, can certainly have an affect on his performance. 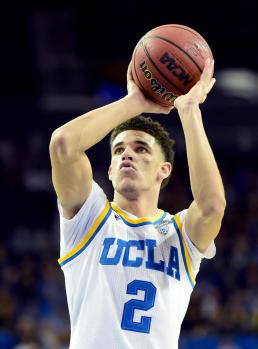 If it is in his head, he’ll need to shoot himself out of his rut, activate hoodieLonzo, anything to get him looking like UCLA Lonzo/No. 2 draft pick Lonzo/future of a franchise Lonzo. Many analysts and players have challenged his shot style so he may need to start with that.

If its not in his head, we’re looking at another possible first-round bust.

Fortunately, there’s still 68 games left in the season to await the arrival of the “real” Lonzo Ball.