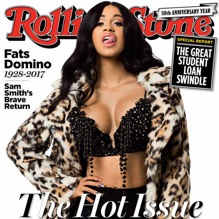 All I can say is, 2017 has been the year for Cardi B! Within three years, Cardi B went from “A regular, degular, shmegular girl from the Bronx”, to topping the music charts with her most successful single, Bodak Yellow to getting engaged to her fiancé Offset.

Given that the 21st century is heavily social media based, most people begin their platforms to see how people like them on social media sites such as Instagram, Twitter, Snapchat, and more. Some individuals have tried to create different lives between social media and the real world, but other individuals, such as Cardi B, have kept her life all too authentic on social media.

Think back to 2014 when you saw Cardi B just making funny videos on Instagram. She only had a thousands followers, and she was in the process of making a bigger name and following for herself. At this time, she was an exotic dancer figuring out her next move to separate from only being known at the strip club she worked at since she was 19 years old.

Cardi B started her venture into gaining a social media following at the age of 21. In an ‘Meet Cardi B’ she did with VH1 before appearing on Love and Hip Hop: New York, she said “The hood was fucking with me, but now the suburbians are fucking with me too. I would have never ever thought that like so many people could relate to things that I say. It has taken me to another world.”

Personally, I became a follower of Cardi B with her notable video “A Hoe Never Gets Cold.” Within moments of watching that video, I could relate and had to follow Cardi B on Instagram. My friends would always tell me ‘I never knew a sense of season.’ since I wore crop tops and other typical summer clothes in the winter and never feel cold.

Cardi’s authenticity became a refreshing light to see on social media through her hilarious videos. Now, Cardi B has 12.6 million Instagram followers and 1 million Twitter followers.

VH1 and Mona Scott-Young recognized Cardi’s following on social media and how successful she could be on their hit reality television show, Love and Hip Hop: New York. Cardi B made her first appearance on the show Dec. 14, 2015 in the first episode of season six. Cardi was able to develop some of her most known sayings such as “If a girl have beef with me, she gon have beef with me..foreva.”

This saying became a favorite of people to use on social media due to its heavy resignation with many people. Most times, when people have an issue with a person, it is long term which can seem like forever. Just look at the Lil Wayne, Birdman, and Cash Money Records ‘beef’.

Cardi only stayed on the show until season seven on Feb. 27, 2017 and decided to take time to develop her music career. That is exactly what she did!

Cardi started to make music industry connections in early 2017 and made a hit entitled Lick ft. Offset from the successful rap group Migos. Shortly after the release of this song, she started dating Offset. In June of 2017, we knew 2017 would be dominated and owned by Cardi B.

On June 16, 20107, Cardi B release her current hit single entitled Bodak Yellow with her newly signed record company, Atlantic Records. Cardi B’s “money moves” got Bodak Yellow to became number 1 on the Billboard Hot 100 on September 25, 2017. She is the only artist from Love and Hip Hop to make this accomplishment. She has been the only woman in 19 years since Lauren Hill to make number 1 on the Billboard Hot 10 without a feature on the song. You can’t tell me that isn’t success! I have personally liked Bodak Yellow since late June of 2017. If I hear Bodak Yellow, I can’t help but sing whether I am at a grocery store, at a club, or a UGA football game and hear it from the jumbotron.

Many would have thought Bodak Yellow would be the end to Cardi B’s success and amazing year, but Offset had one more surprise for everyone including Cardi B. On October 27, 2017, Offset proposed to Cardi B on stage of Power 99’s Powerhouse in Philadelphia with a 8-carat pear-shaped diamond ring with two layers of diamond and a pink hue.

At this moment, they became ‘goals’ and rap’s new hottest couple. On the same day, Cardi B, Nicki Minaj, and Migos released their song Motor Sport. On October 30, 2017, Cardi B made the cover of Rolling Stone magazine.

After seeing the success Cardi B had in just 2017, I believe she will be our upcoming best female rap artist for this generation. She has a refreshing authenticity that can’t be denied through her social media or music. She is–our Trap Beyoncé!