The Cleveland Cavaliers were one of the major teams that were quiet during the excitement of the NBA trade deadline on Feb. 23. But it’s what they did after the deadline that has been jaw-dropping.

Earlier this season, LeBron James made waves when he became very vocal about needing to fill a roster spot with a playmaker or two. He grew adamant about getting someone to help him, Kyrie Irving and Kevin Love down the stretch and into the postseason. The comments came after they downed five of their last seven games.

“We need a f—king playmaker,” James said to his Cavaliers beat writers after a bad loss to the New Orleans Pelicans excluding Anthony Davis.

After heavy criticism, both negative and positive, General Manager David Griffin picked up pure shooter Kyle Korver from the Atlanta Hawks. But that wasn’t the complete answer to their problems. Later, James also acknowledged the team’s lack of a rim protector. After harsh criticism, he later clarified his comments a few days later stating “Tristan Thompson was the one rim protector we had… what if he gets hurt?” to ESPN’s Dave McMenamin.

The trade deadline came and went with no movement from the Cavaliers camp. A day after the hype died down, Deron Williams was waived from the Dallas Mavericks and he made it known that he was headed to play in wine and gold.

How will Deron Williams help the Cavs? 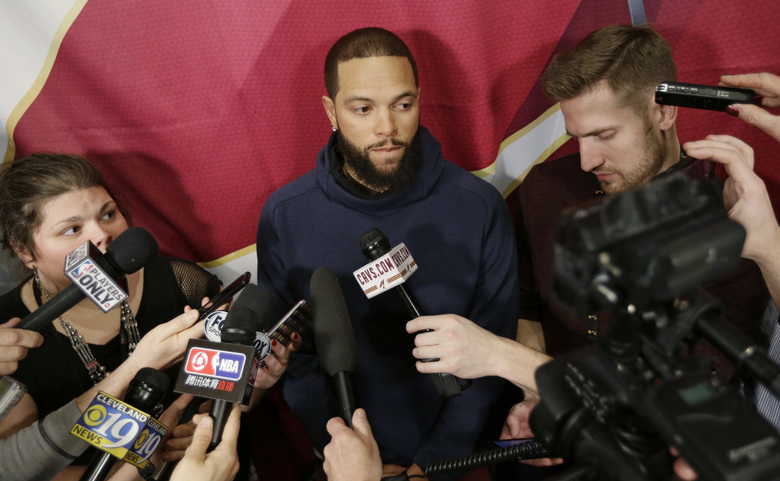 Williams is a great playmaker and can still read the floor and make plays for his teammates. He is still one of the better passers in the league. A few years ago, he was still considered one of the best point guards in the NBA and he still has a lot left in him. The former three-time all-star and two-time gold medalist can create off the dribble and create his own shot which is exactly what the Cavs need.

In his second season in Dallas, Williams was averaging 13.1 points and 6.9 assists in 29.3 minutes before leaving the team. The 32-year-old has career averages of 16.6 points and 8.2 assists over 12 NBA seasons. The third overall pick in the 2005 draft by the Jazz, Williams spent five-plus seasons in Utah before being traded to the Nets in 2011.

Active assist leaders in the NBA

He also currently holds the No. 3 spot in active assist leaders in the NBA, trailing Chris Paul and James.

Andrew Bogut was traded to the Philadelphia 76ers but news quickly circulated that he wanted a buyout from them which was completed on Monday evening. He became a hot commodity in the blink of an eye as teams like the Cavaliers, San Antonio Spurs, Houston Rockets and Boston Celtics swarmed around in efforts to sign him.

League sources have reported that Bogut will be joining the defending champions and looks to play at Quicken Loans Arena soon.

How will Andrew Bogut help the Cavs?

The former No. 1 overall pick is a pure rim protector which is wanted James wants. He has played against James and company as the Golden State Warriors center from 2014-2016 and in both the NBA Finals.

The Cavs are at their best when they spread the floor with shooters, move the ball and create high-percentage shots. They can still do that with the addition of Bogut as much as they want, but if they need someone to give them an anchor on defense and make the game more physical, they can add Bogut into the lineup.

On offense, he’s effective on pick and rolls to the rim and finishing alley-oops, but his two most important qualities are his passing and his screening. With Love out of the lineup for a few more weeks, Cleveland might be able to get him in the lineup and use him as a facilitator from the elbows.

It also goes without saying, that he knows the Warriors playbook and would be able to communicate what’s going on on the floor.

All in all, Bogut give them a different look defensively and offensively, especially in the high post.