Sacramento Kings center Demarcus Cousins was enjoying a jam-packed weekend where he could relax, play basketball with the best players in the world, and unwind before heading into the second half of the season.

Cousins had been unhappy for a while with his current status on the Sacramento Kings roster, where it just seemed that every move the front office made seemingly imploded.

All that changed in a matter of seconds, and the news broke in a post-All-Star-game press conference.

Cousins was staying in New Orleans, the site of the All-Star game and festivities, not just for another night, but for the remainder of the season.

A package deal sent Cousins and small forward Omri Casspi to the New Orleans Pelicans in exchange for rookie guard Buddy Hield, shooting guards Tyreke Evans and Langston Holloway, along with first and second round picks from both the 2017 and 2018 drafts, respectively.

To the rest of the NBA and all those who follow it, this was a monumental trade. But for Cousins, it was met with a sigh of relief, as he is now able to move on from the unhappy situation he was in Sacramento, and play with an elite talent in power forward Anthony Davis.

Davis had quite the weekend himself, earning All-Star MVP honors after dropping 52 points. What came after was just icing on the cake for the power forward out of the University of Kentucky.

Cousins and Davis will now head into the second half of the NBA schedule with arguably the best frontcourt in the game. 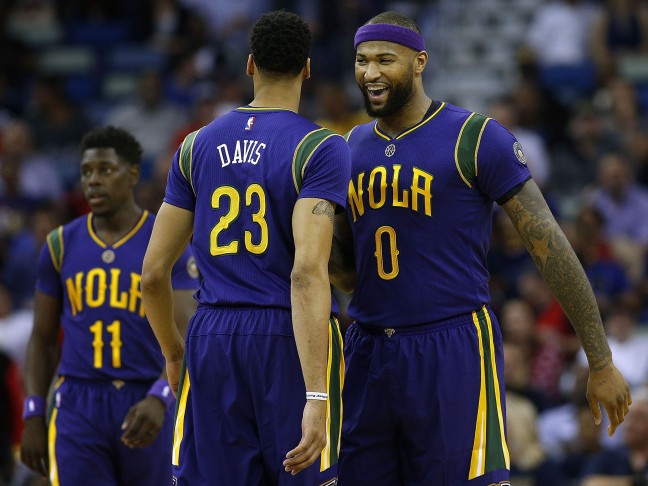 There hasn’t been a frontcourt like this in quite some time, seeing as in today’s game, the league is dominated by strong front courts and incredible guard play, i.e. Golden State.

But the Pelicans are looking past that. They are trusting in seventh-year point guard Jrue Holiday at the helm, with hopes that the strong front-court will make up for the lack of elite guard play.

Since the trade, the Pelicans are 1-3, losing games to the Rockets, Mavericks, and Thunder.

The game against the Thunder featured Cousins picking up his 18th technical foul, which warranted an automatic suspension.

Holliday has found struggles of his own meshing with the two superstars.

The point guard averaged roughly 18 points before the trade and has seen his numbers dwindle as of late, averaging around 10 points a game.

Despite their troubles, the Pelicans are looking to the future, trusting in the fact that great teams need time to develop chemistry and to understand what works best on the court.

In a Western Conference that features top talent including the Golden State Warriors and their four superstars, Houston with James Harden, the Spurs and Coach Popovich, the Pelicans may have to take a few years before they are able to really compete at the highest level.

However, with every experiment, there is trial and error and negatives and positives.

The Pelicans front office is doing it’s best to trend in the positive direction.