Change is afoot at The University of Georgia.

Renovations are underway to further beautify north campus and are set to be completed soon.

Down Smith Street, the new science learning center project is near completion and will open next fall.

On Lumpkin Street, the almost two year old Bolton Dining Commons mirrors the construction of the new Terry College of Business village that opens in 2017.

Butts-Mehre Heritage Hall is located on the outskirts of campus behind Stegeman Coliseum, and it’s the home to everything UGA football. Now, it’s the site where construction has begun on the athletic association’s contribution to UGA’s innovation efforts.

In August 2015, the athletic association approved the construction of an indoor practice facility and construction would begin after that upcoming football season. As Richt left Athens shortly after the football season, symbolically, fixtures of Butts-Mehre left with him en route to a new era of UGA athletics.

“Once completed, this facility will be the best in the nation,” UGA assistant athletic director of facility operations Melvin Robinson said, “I say this in terms of newness, size and location.”

Georgia, infamously known as being one of a few major college football programs without an IPF, will be the last of the 14 SEC teams with one.

Currently, the largest indoor facility in the SEC belongs to Kentucky at 108,000 square feet, most expensive is Arkansas at $40 million. To put that into perspective, Georgia is spending $30.2 million on their facility covering 109,000 square feet.

On the surface, the facility will be used for practices and training during inclement weather and special events such as “Dawg Night” and pro days, but underneath it represents a continuing trend in college athletics.

Now more than ever, there is an arms race across the country. Bigger is better. Schools are ready to spend large amounts of money for the latest-in-technology facilities to not only give their athletes a competitive edge but attract the most elite prospects to their school.

“We actually do call it the arms race among my colleagues,” Robinson said, “In the midst of all of the building and changes, I think what Georgia does best is being Georgia.”

To Robinson, “Georgia being Georgia” means not jumping to build the newest facility but improving from within. Stegeman Coliseum, home to the men’s and women’s basketball team as well as gymnastics, underwent renovations from 2011-2012. Also in 2011, improvements were made to the seating in the baseball stadium Foley Field and additions were made to Butts-Mehre; a few years later came new outdoor practice fields.

“That’s the key, we have building that are twenty, thirty years old and you’d never know it,” Robinson said, “We change from within, you don’t have to build the newest thing all the time to stay ahead of the curve.” 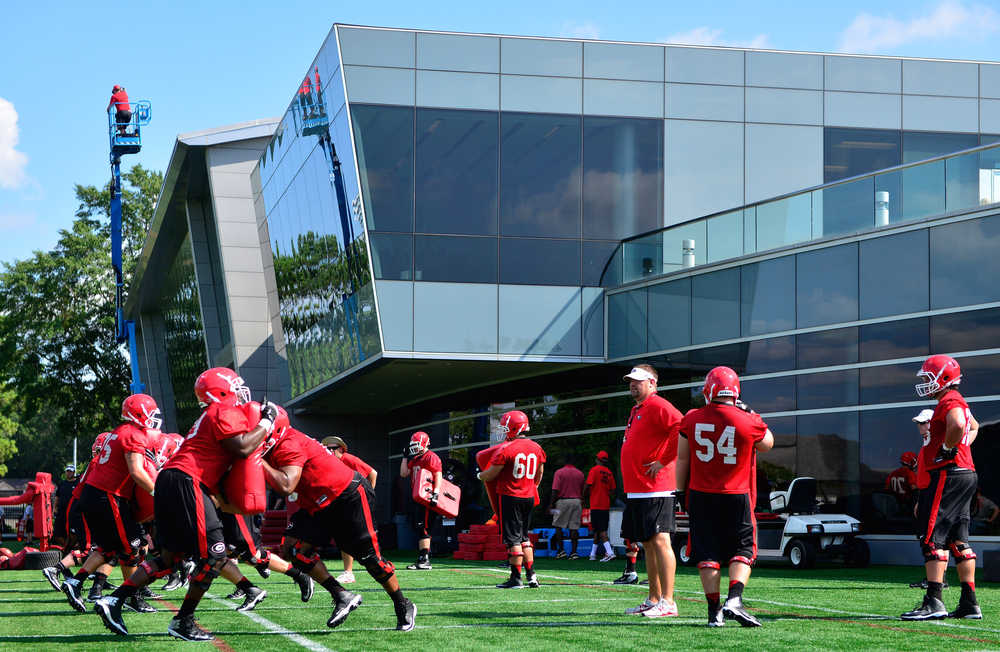 In this new age, it’s almost frowned upon if cranes and scaffolds aren’t seen around athletic facilities. From the coaches’ offices, to player lounges to scoreboards, every aspect of a program is an opportunity to stand out amongst the others.

“I know during spring practice, it’s been a major selling point among recruits,” on-campus recruiting specialist within the UGA football department Julius Thomas said, “They’re wondering what Georgia will look like in the future and this is a major step forward.”

Scheduled to open in January 2017, the indoor practice facility will be connected to the Butts-Mehre building in place of where the Nalley Multipurpose Facility once stood.

It will not just be a hub for the football team. The facility will feature a 65 meter track, jumping pits and a netting system that will allow other teams to train in inclement weather.

The lack of a full indoor track came as a surprise to some, according to head coach Petros Kypraniou, the team will use the facility to every capacity considering what they were doing before during inclement weather.

“Sometimes we would wait for the football team to finish in the turf room and set up in there,” he said, “Other times, we’d have a 20 by 20 tent set up and wait for the weather to calm down.”

The leader in indoor tracks is in the SEC according to Kypraniou, the University of Arkansas. Opened in 2000, the Randal Tyson Track Center is a separate indoor facility to the football team’s and is regarded as the best indoor track in the world.

With a nationally ranked boys and girls team on a consistent basis, senior runner Christian Harrison believes his team should’ve gotten more from the deal.

“The track team has NCAA record holders, national champions, and olympians. I understand track is not a revenue sport but it seems like if the athletic department valued performance and championships as much as the amount of money a sport brings in, they might have added an indoor track,” Harrison said, “I’m not saying football doesn’t need an indoor facility, just saying I don’t see the harm in letting the track team avoid the cold weather as well.”

According to Robinson, an indoor track isn’t as simple as one would think.

“When you look at the dimensions of the facility, there just isn’t enough space for a 300m track,” he said, “We’re already up against our surrounding streets as is, to place a track in there we would have to expand into the streets

Junior Kendell Williams, both an indoor (pentathlon) and outdoor (heptathlon) SEC and national champion, was the only athlete to speak at the groundbreaking ceremony for the facility in February. While she wishes for a full-length track, she sees the benefits of having what equipment they’ll have once it’s complete.

“The stretch of track will allow us to work on speed and power events that we run during the indoor season such as the 60 meter hurdles and dash,” she said, “I am really excited to see the final product and we all can’t wait until it’s ready.”

Ideally, the IPF will be opening its doors to a football team practicing for a New Year’s Six or College Football Playoff game along with the other sports that will call it home training alongside them for their upcoming seasons.

However, the fact remains the same according to Robinson: there’s no direct correlation between building new facilities and winning more games. Winning teams have IPF’s as do losing teams. To him, substance is greater than style.

“If it was scientifically proven then of course let’s build everything new from scratch,” he said, “We’re a traditionalist but we’re innovative. Style is great but that doesn’t win, we want to fill the facility with great students-athletes and grow them into the best competitors possible, that’s how you win.”