Since he started playing football at the age of 6, Jarvis Wilson, now 19, has never known his motivation.

For a long time it seemed like having no intrinsic incentive to play had no effect because Wilson has always been a special athlete. He led his high school team to a state championship appearance, received a bevy of Division I offers to play college football, and now he’s a freshman safety at the University of Georgia.

Despite the many high points of his life, Wilson finally hit rock bottom in March. Sick, injured, and fed up, he contemplated leaving the sport he’d played for most of his life. It was then he picked up the phone and called his mom.

“I was bad. I thought about quitting because I never knew who I played for. My mom was good. My dad was good,” Wilson said. “I had to find my reason, so I called my mom.”

Wilson’s mother, Camelia, gave him the best advice she could. 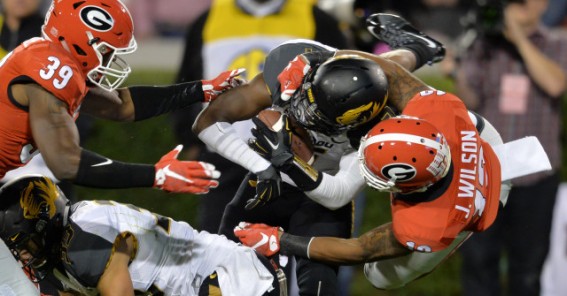 Growing up in Tupelo, Miss., Wilson attended Tupelo High School where he quickly became the star of his football team, playing wide receiver and safety. In May 2014, Wilson committed to Mississippi State University, only an hour away from home.

For seven months, he was committed to Mississippi State, and for a while he wasn’t looking anywhere else until Georgia came knocking.

“I actually had the Georgia offer for three months, and I didn’t even know it,” Wilson said. “I really didn’t know until Coach (Jeremy) Pruitt called me and told me. I was still pretty solid on (Mississippi) State until I came here.”

Wilson had his official visit to Georgia on Nov. 22, 2014 for the Charleston Southern game , and only days latter, he sent out a tweet that would change his life.

“I came here and it was a different experience than it was back home.” Wilson said. “I loved the people and the atmosphere. It was everything about Georgia.”

But leaving home would be difficult. While most athletes would be ready to sign on signing day, Jarvis broke down emotionally.

“I was committed to Georgia, but I didn’t know where I was going to go,” Wilson said. “I actually cried the day before signing day.”

So he reached out to his lifeline: his mother.

“I was for Jarvis. I wasn’t really for a school. I just wanted to find the best school for him,” Wilson’s mom said. “I just told him to pray, and he picked Georgia.”

As an early enrollee, the 6-foot-2, 190-pound defensive back arrived at Georgia in January 2015. Even though Wilson was working hard on and off the football field, something was still missing.

“Coming here, I stepped in a whole new world,” Wilson said. “I was just looking around and I didn’t know anything or anyone. People knew me, and I had to realize that some people love Georgia football more than you. On the field, I was just going through the motions. I started feeling like it wasn’t fun anymore.”

But even those feelings of emptiness couldn’t stop him. During his freshman season, Wilson climbed the depth chart and saw time sparingly at safety and cornerback. As the season waned, he was touted as a terrific athlete, but his immaturity held him back.

“He was a little childish. He let some people influence him when we were out there on the football field,” said teammate and Georgia wide receiver Terry Godwin. “He was out there just playing around all the time.”

Wilson remained that way until his awakening in March. His athleticism had taken him as far as it could, so he did what his mother told him to do. He prayed, and he got his got answer.

Since that moment, Wilson’s entire outlook has changed. In a matter of weeks, he’s matured. No longer going through the motions, he’s found love for football, and it has shown in his work ethic.

“I’ve watched him grow up. Now, he goes out there and works hard every day,” Godwin said. “He doesn’t go out and complain like some people. He puts in extra time on the field and in the weight room now.”

With his newfound maturity, Wilson hopes to see more time on the field this year, contributing to Georgia’s top-ranked pass defense.

Most importantly, if you ask him about his motivation, he can give you an answer.

“I play for God,” Wilson said. “He gave me this talent and this ability, so I can’t waste it. I want to be the best for Him, so you can expect a better me going forward.”