At The Univeristy of Georgia, it’s easy for us to take advantage of the luxuries we have.

At a flagship institution, we have a multitude of resources and utilities at our disposal. However, there’s one smaller luxury that is easy for us to take advantage of because it’s so common: water.

In every building, there’s a water fountain available to us only a few feet from just about every destination. Even when we’re not drinking it, water surrounds us. Our very own fountain at Herty Field requires an estimated 9,000 gallons. Clearly The University of Georgia is adequate in its supply of water.

But what about the areas where water is scarce?

These are the questions that concern UGA’s NAACP President Akash Shah. Because of his concern with the global water crisis, Shah has led efforts to partner the university’s NAACP with the Thirst Project.

The Thirst Project is the world’s leading nonprofit youth organization whose goal is to bring clean water to impoverished communities. Since their founding on May 9, 2008, The Thirst Project has helped 280,000 people in 13 counties, visited 320 campuses, and raised $8 million.

After a Thirst Project director reached out to Shah, NAACP partnered to ensure that the Thirst project has a location on campus to get a wide number of UGA students interested in the movement. 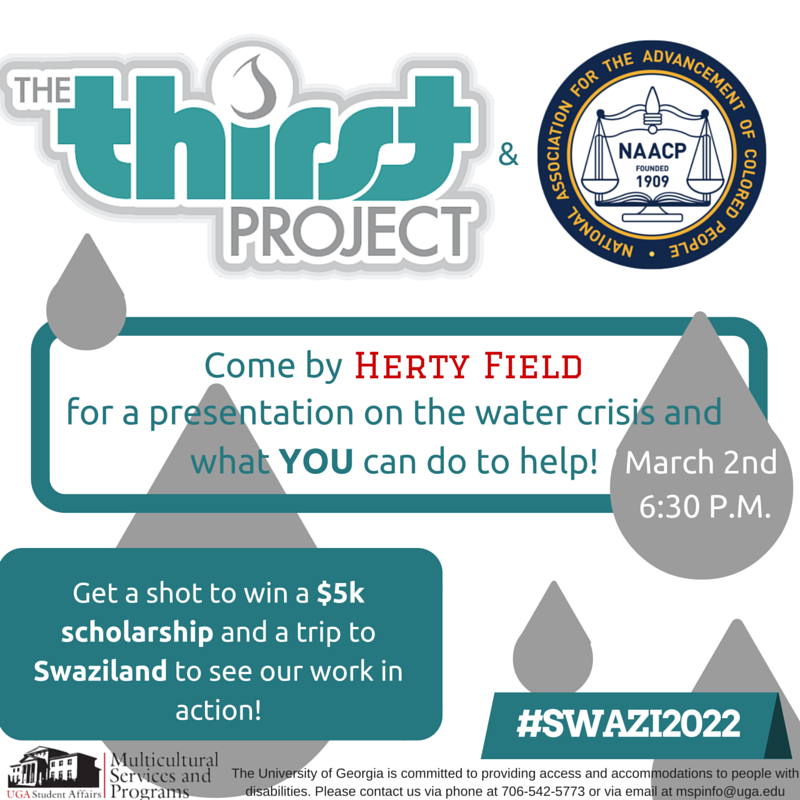 “The goal is to get as many people involved as possible. I know a lot of people look for causes to put their heart into and help out with, and a lot of people don’t know that this exists,” NAACP president Akash Shah said. “I feel like being a part of the Thirst Project gives you a direct input. You raise the money and it goes directly to clean water initiatives”.

According to their website, https://www.thirstproject.org, 100% of all public donations go directly to funding the organization’s well projects, an initiative that builds wells in communities that are without a clean water supply.

Shah hopes that by being a part of the Thirst Project, students will be given a chance to think about other struggles outside of the student life at the University of Georgia.

“[In some of the countries] some of the children have to carry water around 20-30 miles just to get it back to their homes. We couldn’t even think about that,” he said.