That brings me to Curious Case of Derrick Rose.

That’s no reason for the animosity towards the star point guard though.

Maybe it’s the fact that SpotRac reported that Derrick Rose has collected approximately $60 million over the last four years for completing just 32 percent of his work.

That can’t be it either. Grant Hill collected around $93 million during his stint with the Orlando Magic despite only playing 36 percent of games during his seven years there. He didn’t receive the backlash that Rose is receiving now.

So why is Derrick Rose facing so much scrutiny, especially from the Chicago media?

Being a Chicago native, let me tell you about how people in the Windy City feel.

Chicago sports fans will support you, win or lose, as long as you are passionate. The key word here is PASSION. Chicago is used to guys like Walter Payton, Dick Butkus, Mike Ditka, and of course the great Michael Jordan. These are men who would lay it down on the line despite the obstacles in their way.

After becoming the youngest player to win MVP in NBA history, Chicago was ready embrace Rose, its native son. His superior speed and high-flying playing style electrified the United Center, reminding them of how great their Bulls could be. Then, the worst would come. 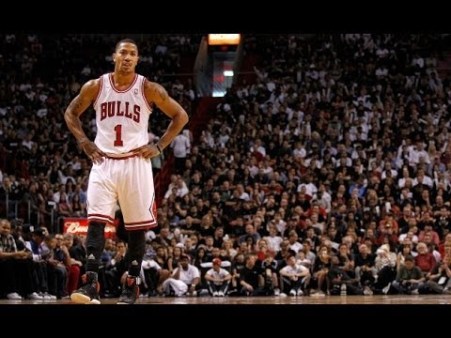 On April 28, 2012, in the fourth quarter of a first-round playoff win, Derrick Rose tore his ACL. The city was silent, and Windy wept. In the following months, Chicago would anticipate the return of Rose, only to be disappointed.

Despite being cleared for full-contact practice in Jan. 2013 and cleared for play in March 2013, Rose sat out the entire 2012-13 season. The move left many wondering why, especially since Iman Shumpert suffered the same injury on the same day and returned to the court in January.

After being cleared for contact, Rose would tease Chicago fans with his pre-game workouts by dunking and showing the explosiveness that won him MVP. Many wondered, “Why isn’t he playing?” But still Chicago was patient, and Windy kept quiet.

Then came what was dubbed as “The Return.” The 2013-14 season was upon Bulls fans, and the former MVP was making brass statements. Stating that he had added five inches to his vertical and that he was the best player in the NBA, Rose had Chicago fans hopeful. However, when the season started, D-Rose was largely disappointing, and then disaster struck again.

Ten games into the season, Rose tore his right medial meniscus. The hometown kid faced a decision: remove the meniscus and return in 4-6 weeks or repair it and miss the season. He chose the latter, and while many fans were upset, a lot of them understood. Again, Windy wept but began growing impatient.

Then, the 2014-15 season was upon us, and through the first eight games, Rose had only played four games due to an ankle sprain. It wasn’t the injury that made Chicago fans upset, but rather the comments he made after the injury. During an interview with the Chicago Sun Times, Rose said:

“I don’t want to be in my meetings all sore or be at my son’s graduation all sore just because of something I did in the past. Just learning and being smart.’’

The comment nearly turned Chicago sports fans against its prodigal son. A city that tried to embrace its own was heartbroken. Even after being ripped by Charles Barkley and the media, both nationally and in Chicago, the fans still continued to cheer. Windy was hurt, but she was forgiving.

During last season, Rose showed flashes of his MVP-like ability but was never quite the same, often overshadowed by the play of rising star, Jimmy Butler. Still, injuries caught up with the Bulls’ guard. On February 27, 2014, Rose has surgery on his right medial meniscus, suffering the same injury as he did before. Only this time, he opted to remove the meniscus and return to the team before the playoffs.

Rose played well through most of the playoffs. However, it wasn’t what he did during the playoffs that angered fans, but what he didn’t do in the Bulls’ final game of the season.

In the second half of Bulls’ Game 6 loss to the Cleveland Cavaliers, Derrick Rose took just four shots, scoring only once. This putrid second half performance came after he went 5-9 in the first quarter with three assists. So what happened?

Dan Bernstein, a CBSChicago senior columnist, reported that tensions between Rose and Jimmy Butler led Rose’s “passive-aggressive” play. Upset that Butler kept calling for the ball, he simply refused to shoot, and was ultimately outplayed by the undrafted Matthew Dellavedova.

Don’t quit on the city, and the city won’t quit on you. Still, Derrick Rose is one of her own, so Windy is angry, but she forgives.

That brings us to this year’s training camp. During Media Day, when asked about a sexual assault civil lawsuit filed against him, Rose talked about his impending free agency. He spoke about being ready to chase the money he believes is coming his way. From ESPN:

“This whole summer I had tunnel vision. My mindset was just making sure that I was working out everyday and spending as much time as possible with my son and focusing on them two things.

“Making sure that my family is financially stable — as far as, you see all the money that they’re passing out in this league. Just telling the truth, just knowing that my day will be coming up soon. It’s not for me, it’s for P.J. (his son) and his future, so that’s what I’m thinking about right now.”

Rose reasserted a few moments later he still believes his future is in Chicago, but with all the big money coming into the league because of the new television deals, he wants to keep the possibilities open.

“It’s here. But when you talk about that much money, the only thing you can do is prepare for it, trying to prepare not only myself but my family. I’m doing all of this for my son. I’m thinking about his future even though we’re all right, we’re comfortable. When you talk about that ‘X’ amount of dollars, I think it raises everyone’s eyebrows. It’s nothing wrong with being over-prepared.”

For Rose to speak about free agency that is two full seasons away, infuriated Chicago fans. Many in the Chicago media called Rose’s comments stupid, ill-advised, and a spit in the face.

The fans that stood by him through every injury, every return and every disparaging comment had finally had enough.

To make matters even worse, in the aftermath of his comments, Rose fractured his left orbital bone during the first practice of the season. The fans nor the media were very nice. ESPN’s Sarah Spain, a frequent Derrick Rose supporter, pulled no punches on ESPN radio when she said:

“We’re coming up to our last straw here, where we’re having trouble defending him. Not just because of the latest injury, which by all accounts is a total accident and not his fault in any way. You gotta feel bad for him. But it just adds on to this pile that’s keeps getting bigger and bigger.

“The patience is running so thin here in Chicago for our hometown boy. He could be out anywhere from five to 28 games, but with Derrick Rose is could be all season. Who knows? You know, he wants to have his orbital looking just right when he goes to his son’s graduation in 18 years

There is no more sympathy for Derrick Rose. He’s alienated the fans that loved him most, and that is what makes him different from Grant Hill, Penny Hardaway, and Bill Walton.

The criticism has only started. Trust me, once you feel Windy’s wrath, only winning can appease her. Just ask Jay Cutler.