After the Civil War was fought, black people overwhelmingly supported the Republican Party because that was the party of abolitionism. The first black US legislators were black Republicans. The Southern Democratic Party was the party of slavery, states’ rights, and secession. Black people weren’t even allowed to attend any type of function sponsored by the Democratic Party until 1924, according to BlackDemographics.com

During the 1932 election, Franklin Roosevelt was the first Democrat that a majority of black people supported. FDR’s “New Deal” led many African Americans, and many other Americans, to believe the government could be used as the catalyst to end the Great Depression and southern segregation.

Black people were still heavily involved with the Republican Party during FDR’s 4 terms in office, however. According to FactCheck.com, party identification was virtually split for African Americans between the years of 1936 and 1944. During the 1948 election, however, party affiliation for African Americans began to trend toward what it is today.

Harry Truman, the incumbent President running for re-election signed an Executive Order banning segregation in the Armed Forces and also set up regulations against racism in federal government employment positions. African Americans were hell-bent on a desegregated military due to the treatment they endured during World War II in a segregated military and rewarded Truman with unwavering support in the 1948 election.

Most black people had their minds made up on which party they affiliated with by the time the 1964 election came around. Incumbent President Lyndon Johnson was challenged by Senator Barry Goldwater of Arizona during this election. Goldwater was a segregationist who believed in state’s rights concerning Jim Crow, and opposed the Civil Rights Act of 1964 (and current presidential candidate Hillary Clinton worked tirelessly on Goldwater’s campaign that year in case you didn’t know.)

It was becoming clear that the Republican Party that freed the slaves and ushered in the era of Reconstruction after the Civil War was no longer the same party it once was.

Black people overwhelmingly support the Democratic Party, and black people see eye-to-eye on many issues such as the death penalty, ending the war on drugs, de-militarizing police forces, healthcare, ending the war in Afghanistan, and so on. Yet many black people, especially in the Bible belt are pro-life, against gay marriage, and pro 2nd Amendment, just to name a few.

With so many differing opinions in such a small amount of the population, many politicians see courting the black vote as doing more harm than good. However, having the African American voting bloc could be the group to give a candidate the push they might need to win an election if it is close. This is why we are starting to see candidates such as Rand Paul, Carly Fiorina, Hillary Clinton, and Bernie Sanders address prison reform and ending the war on drugs.

Gaining support of the African American voting bloc will take more than just the candidate being black, or being the wife of Bill Clinton, or having history of working in Civil Rights issues in the past, or having the history of making a lot of money. Whoever gets the black vote will depend on who meets the needs of the black voter, just like any voter.

Black voters in their early 20s through 30’s will support the candidate who will pledge to work alongside the Black Lives Matter Movement, reform the justice system, end the war on drugs, and reform post-secondary education. Black voters 40 and above will support the candidate who will have the best record and plans on expanding the middle class, reforming the justice system, and taking on entitlement reform.

The candidate must also possess a quality about himself or herself that shows that they will fight for the African American community even when it might seem politically disadvantageous. 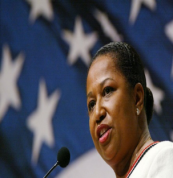 The candidate that can best fuse these qualifications will be the one African Americans will support, which could be the voting bloc that tips the election one way or another. The Republican Party has a very steep hill to climb and until they get serious on addressing the issues that are affecting African Americans and stop talking about what their party did for African Americans hundreds of years ago, they will continue to lose the black vote.