According to some, one is the loneliest number, two is company, and three is a crowd. According to Andy Warhol, two people are a crowd while three, well, that’s a party.

Depending on which school of thought you subscribe to, the quarterback situation at Ohio State is either a crowd, or it’s a party.

Urban Meyer has long been one of the best coaches in football, collegiate or professional, but after the 2014 season, there is no doubt that at the very least he is the preeminent head coach in college football. En route to victoriously standing atop the summit of college football’s first ever post season playoff, the Buckeyes overcame season ending injuries to two quarterbacks and rebounded from an embarrassing early season loss to unranked Virginia Tech.

Like any conquering king, Meyer entered the offseason presiding over both acquired riches and an embarrassment of wealth throughout his depth chart, particularly at the quarterback position. Ezekiel Elliot and Joey Bosa were both important to Ohio State’s run to the top, but the most essential cog in the championship machine was Cardale Jones. 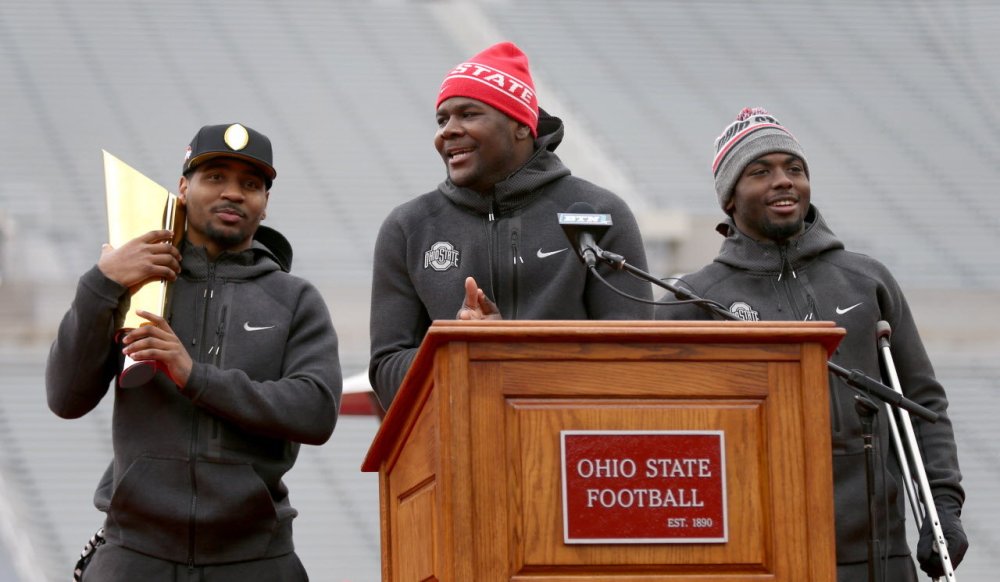 Jones, the third string signal caller at the beginning of the season, dazzled in his three starts in relief of the injured J.T. Barrett, throwing for 742 yards, five touchdowns, two interceptions, and completing 63.8% of his passes. Furthermore, of those three starts, one of them was a win or go home playoff game and the other was the National Championship.

But before Cardale became 12 Gauge and the most talked about quarterback prospect going into the 2014 NFL Draft (AFTER ONLY THREE STARTS), he stood on the sideline watching J.T. Barrett piece together a historic season. Barrett threw for 2,834 yards, 34 touchdowns, and only 10 interceptions, while also rushing for 938 yards and 11 additional touchdowns.

All told, Barret accounted for an outstanding 3,772 yards and 45 total touchdowns[1]. He was named the Big Ten Quarterback of the Year, selected to the All-Big Ten Conference First Team, and finished fifth in balloting for the Heisman Trophy. Had Barrett not broken his ankle in the season finale against Michigan, Cardale Jones would still be known as the guy who complained about the annoying phenomenon that is attending class.

However, no one knows more about “what ifs” and “if onlys” than incumbent starter Braxton Miller. Before the 2014 season, Miller was the reigning TWO time Big Ten Player of the Year and a favorite for the Heisman Trophy. He has more conference awards (7) than any other player ever Big Ten history, is one of only three players to be a two time MVP of the conference[2], and holds a 22-2 career as a starter.

Miller was the unquestioned leader before the 2014 season began, but Meyer was forced to reevaluate his options when Braxton re-injured his right shoulder on August 18th, just 12 days before the Buckeyes’ season opener against Navy. King Meyer gazed out upon his kingdom, the Mufasa of the college football landscape, looking for someone who could “replace the 100 yards of offense that Braxton gave provided each game on his own.”[3]

Luckily, he not only found one replacement for Simba, but he found a replacement for his replacement as well. In the early months of 2015, the Buckeyes find themselves not only basking in the glow of a national title, but also with three lions capable of ruling Pride Rock.

Which brings us to the serendipitous conundrum Urban Meyer found himself in, at least until Braxton Miller announced that he would crossover to the wide receiver position and thus remove himself from the crowded quarterback imbroglio. This obviously does not completely resolve the situation for Meyer, but now instead of a crowd auditioning for quarterback, he only has to decide between the tandem of Barrett and 12 Gauge Jones. 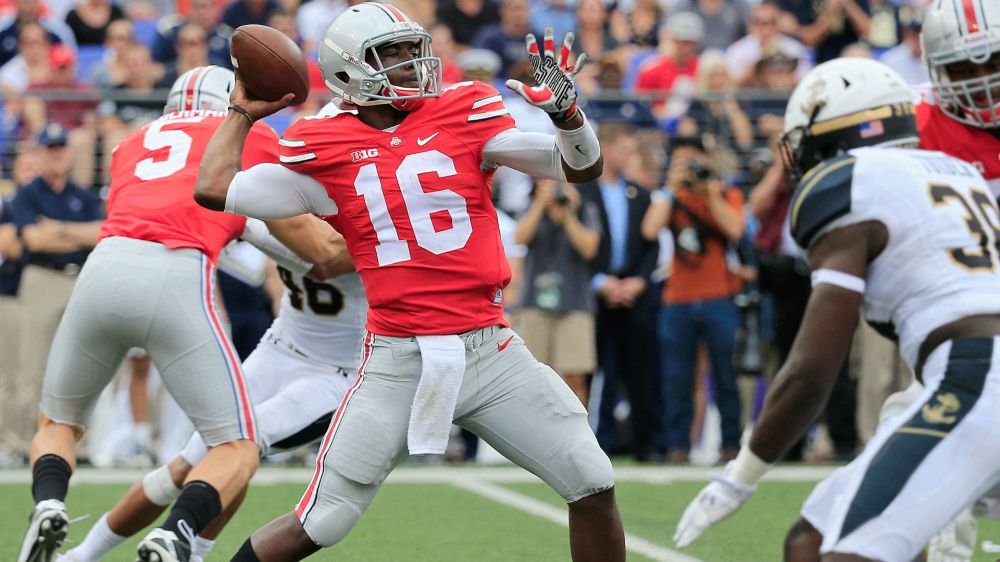 On one hand, the case for Barrett to be the starter is compelling because he has more overall experience than Jones and displayed that he can produce at unprecedented levels. However, for Cardale Jones the argument is more time sensitive. He has one less year of eligibility than Barret does, and, if Jones is named the starter, would more than likely leave for the draft after the 2015 season.

While he does not have as large of a sample size as Barrett, but Jones started the two most important games of the year and responded with two clutch performances. Barrett’s nine games as a starter were nothing short of phenomenal, but orchestrating the defeat of the perennial powerhouse Alabama Crimson Tide and then the most electrifying team in the nation, the Oregon Ducks, is hard to ignore.

Giving the nod to Jones is the move that would make the most sense simply because Barrett is guaranteed to be around next season. If Meyer decides to start Barrett instead of Jones in 2015, then Jones would probably make the jump to the NFL instead of electing to sit behind Barrett while his eligibility wilted away.

Starting Jones is the most economical way to get the most out of each player. Jones will presumably continue to be a phenomenal player in 2015, and then hand the keys to the kingdom over to Prince Barrett for 2016. As an insurance policy, if Jones happens to fall prey to injury, Barrett is waiting on the bench, ready to yet again step in for an electrifying Buckeye quarterback.

Braxton Miller’s move to receiver transforms the quarterback competition into a quarterback equation; figure out how to formulate a scenario where you maximize the talent of both Jones and Barrett

While Andy Warhol regarded three as a party and two as a crowd, if Urban Meyer plays his cards correctly the crowded competition of Barrett and Jones will bring plenty of parties to Columbus in the coming years.

Not all crowds are a party, but all parties have a crowd. For Ohio State, their crowd of J.T. Barrett, Braxton Miller, and Cardale Jones, in addition to Ezekiel Elliot and Joey Bosa, is indubitably a celebration waiting to happen.

[1] Barret’s 45 touchdowns not only were 54% of Ohio State’s 83 total touchdowns, but also the most ever by one player in the history of the Big Ten conference.