With the NBA calendar year set to begin, I’d like to take a quick look at some of the storylines heading into the Free Agency Frenzy.

Aldridge is coming off another fantastic season with the Portland Trailblazers, averaging 23.4 points and 10.2 rebounds and adding another All-Star appearance to his résumé. Though the Trailblazers made the playoffs in the tough Western Conference, they were ousted in the first round by the Memphis Grizzlies

So where does the All-Star forward end up? The Los Angeles Times reported Monday that Aldridge is leaning towards signing with the Lakers. With the addition of D’Angelo Russell in the draft and Kobe Bryant and Julius Randle returning from injury, the Lakers are boasting a promising future and the bright lights of Hollywood that will certainly intrigue Aldridge.

However, a meeting with the Spurs will feature Gregg Popovich, Tim Duncan, and Tony Parker. It will be incredibly hard for the 6-foot-11 big man to pass up an opportunity to play for a franchise that hasn’t missed the playoffs since the 1996-97 season with arguably the greatest coach of all time at the helm.

My Prediction: LaMarcus Aldridge signs with the Spurs. Although the Spurs have ten players set to be free agents, R.C. Buford will find a way to free enough cap space to sign Aldridge without compromising their future.

It’s no secret that the Miami Heat and franchise cornerstone Dwyane Wade are at a contractual impasse. Pat Riley and Micky Arison feel like Wade should sign a Dirk Nowitzki/Tim Duncan type that would allow the Heat to have some flexibility to resign Hassan Whiteside and go after Kevin Durant or Anthony Davis in 2016.

Wade, however, has taken less money in his last two contracts to accommodate Miami’s spending habits. Having earned $20 million less than what he could have earned, the guard would finally like to be paid like a superstar.

Wade will use his player option to opt-out of the last year of his deal with the Heat. Despite being 33 years old, Dwyane Wade is still a top 5 shooting guard in the NBA, and he’ll have plenty of suitors when free agency begins.

Wade will receive considerable interest from the Los Angeles Lakers, Los Angeles Clippers, Oklahoma City Thunder, New York Knicks, and Cleveland Cavaliers. While only the Lakers and Knicks can offer him max money, the Clippers, Thunder, and Cavs offer him an opportunity to win now.

My Prediction: Wade re-signs with the Heat with a 3-year deal worth around $48-51 million. The Heat have a reputation of taking care of their guys. If Dwyane Wade leaves, it’ll cripple that franchise for years. Wade wants to retire in Miami, and he’ll get to.

Fresh off the organization’s second NBA Finals appearance, the Cavs’ roster is in flux once again. LeBron James, Kevin Love, and JR Smith have all opted out and are unrestricted free agents; Tristan Thompson, Iman Shumpert, and Matthew Dellavedova are restricted free agents.

For many it’s a forgone conclusion that LeBron will re-sign with the Cavs, but that should not mean that it is an absolute certainty. If the Cavs don’t put LeBron in position to win next season, he could look elsewhere. That is why many sources are saying that LeBron will have a “wait-and-see” approach before he re-signs.

The first thing Cleveland has to take care is Kevin Love. Love has indicated that he would like to be in Cleveland, but he also wants to test the market. Everyone knows how difficult last season was for Love. He dealt with back and shoulder injuries and looked hesitant as Cleveland’s third wheel behind LeBron and Kyrie.

The Cavs had tremendous success without him during the playoffs. It would not surprise me if he left, and he’ll receive lucrative offers from the Trailblazers and possibly the Lakers. However, Cleveland can offer him the most money and a chance to win a title.

Tristan Thompson is next up. Thompson exploded during the Cavs’ playoff run as a rebounder and defender. The Cavs have the right to match any offer sheet Thompson signs, but a team willing to offer Thompson enough money could cripple Cleveland’s chances of retaining him.

Now, the rest of the roster: JR Smith opted out of his last year worth $6.4 million, and he is reportedly looking for a 3-year deal worth $24 million. Smith probably will not get that, but I would not be surprised if teams looking for bench scoring throw that kind of money at him.

Shumpert will receive a little interest in the market as well, but because he is a LeBron favorite, Cleveland will likely match offers for him.

Delly is another story. It is unknown how much interest Delly will get on the open market, but every year a player will get a somewhat ridiculous contract from a team. This year, that player could be Dellavedova.

My Prediction: Cleveland will keep most of the team intact. LeBron and Kevin Love will sign 1 year deals with player options on the second year.

Cavs will match any offer for Tristan Thompson and Iman Shumpert. JR Smith re-signs, but Delly leaves. Dan Gilbert will likely go over the luxury tax, but if that means keeping LeBron happy then so be it. 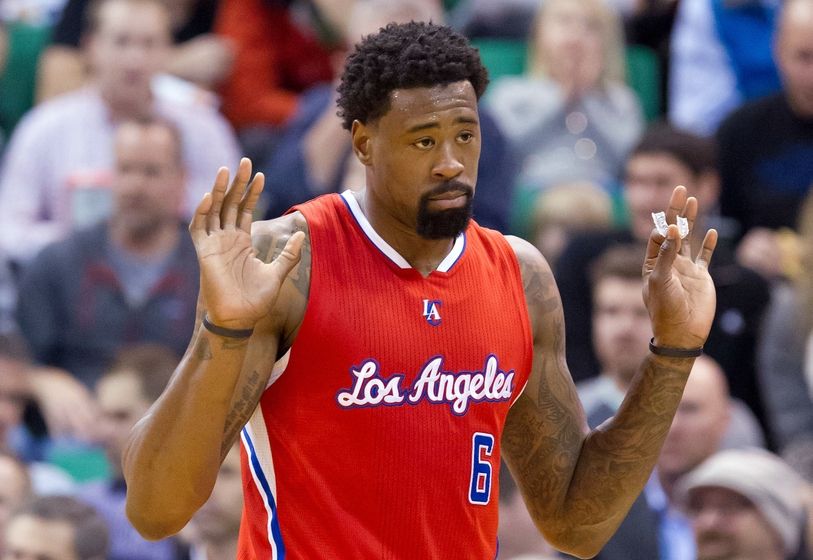 In all likelihood, DeAndre Jordan will be choosing between three teams: the Dallas Mavericks, Los Angeles Lakers, and Los Angeles Clippers. Reports of friction between the center and Clippers’ star point guard Chris Paul have some wondering if Jordan wants to remain with the Clippers.

Dallas offers Jordan, a native Texan, an opportunity to return to his home state. Also, there is no state income tax in Texas, so DeAndre could keep most of the money he makes. ESPN reported that Jordan wants a bigger role in the offense, and Dallas can certainly provide that to him.

Everyone in and around the NBA knows that the Lakers are actively looking for a big man, so it shouldn’t come as a surprise that Kobe and Co. are trying to get DeAndre Jordan to switch locker rooms at Staples Center.

The Lakers, like the Mavericks, have a lot of money to spend and can throw max dollars DeAndre’s way.

The Clippers are desperately trying to improve their roster and keep their nucleus intact. They definitely have the best win-now situation for Jordan.

Nevertheless, if the reports about him wanting a bigger role and only a four-year deal are true, the Clippers no longer have the advantage to sign him.

My Prediction: DeAndre Jordan re-signs with the Clippers. Most people that follow the league would agree that Jordan is offensively challenged. His weaknesses would be magnified if he were to play with any point guard that is not named Chris Paul.

Does anyone have an idea of what the hell is going on is Sacramento!? The always dysfunctional franchise made headlines before the draft. Allegedly, Kings’ coach George Karl was trying to trade All-Star center DeMarcus Cousins without the permission of Vlade Divac, VP of basketball operations, and owner, Vivek Ranadivé.

This trade speculation led to some pretty cryptic tweets from Boogie and former players of George Karl.

Also, there are rumors that Ranadivé is looking to remove Karl as the head coach even though Karl has only been in Sac-Town for four months and has three years and $10 million left on his contract. There are even some reports that the Kings are trying to pry John Calipari from Kentucky, but Cal has since refuted the story.

The Kings have a pretty talented roster, but a very dysfunctional front office. It’s the front office that could stunt the growth of a team that is talented enough to make a push for the playoffs. So what, if any, changes are going to be made?

My Prediction: George Karl will play nice with Kings’ management. Cousins will not be traded, and the Kings will likely make a move for a point guard like Ty Lawson or Rajon Rondo.

HONORABLE MENTIONS AND OTHER PREDICTIONS:

Jimmy Butler: The Bulls will match any offer sheet for Butler.

Marc Gasol: Gasol will resign with the Grizzlies on a max contract.

Draymond Green: The Golden State Warriors will re-sign Green on a near max deal.

Greg Monroe: Monroe will head to New York on a deal worth around $15 million a year.

Atlanta will lose either DeMarre Carroll or Paul Millsap, possibly both.