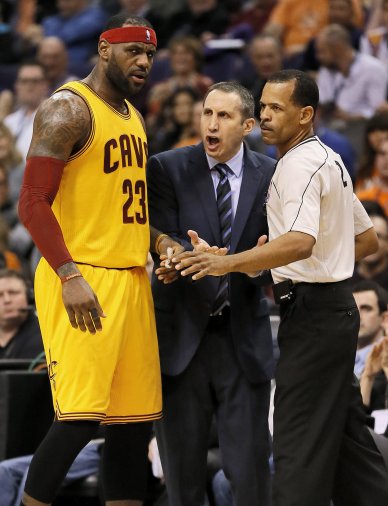 The scene opens with a once-in-a-generation athlete touching down at a metropolitan airport and being welcomed by a throng of citizens, all shouting jubilant, championship-or-bust proclamations.

“We love you!” “Marry me!” “Welcome, Basketball Messiah!” they exclaim with frenetic glee.

Until, that is, the games start. Suddenly the Super Friends don’t mesh on the court. Loss follows loss. Rumors of friction in the locker room abound. The coach appears aloof. Who is this guy anyway? He’s a former video coordinator, how could he possibly know how to orchestrate a team of unprecedented talent?

Then, like a sunrise, unbridled joy alights upon the city as the super team, led by the former video coordinator, reaches four straight NBA Finals.

Fast forward five years and we seem to be watching the same movie, albeit with different characters. The Cleveland Cavaliers are to the Miami Heat what “Parks and Recreation” is to “The Office.”

Each show was filmed in the same fashion, each had a similar storyline in which the principle character (Michael Scott, Leslie Knope) is zany but effective in their own, strange ways, and each show employed the talents of actress Rashida Jones.

Cleveland and Miami both feature Lebron James, the 6’8 basketball version of Rashida Jones, both assembled rosters composed bonafide superstars, both franchises settled upon an unknown but seemingly talented individual as their coach, and both teams experienced their own growing pains.

The Miami Heat began their stretch of dominance with a rather unimpressive 9-8 record, including a stretch where they lost four out of five games. Drama ran rampant in South Beach, Erik Spoelstra was coaching for his job, and Lebron was all but doomed to become the Charles Barkley or Patrick Ewing of our generation.

The Cavaliers’ story has been no different. Three different times this season the team from Cleveland, Ohio has lost at least three consecutive games, at one point losing six in a row. Superstar center Kevin Love has been described as “lost,” “confused,” or even “lacking in confidence.”

Head Coach David Blatt was certain to be fired at any moment and, similar to Erik Spoelstra, experienced his own physical altercation with Lebron James. In 2010, you may recall James “running” into Coach Spo during a timeout.

This year, James shoved David Blatt during a stoppage in play to prevent him from receiving a technical foul. In both instances, the media erupted and replayed the footage time and time again with the same breathless excitement of a UFC fight.

However, here we are post All-Star Break and the Cavaliers are charging to the top of the Eastern Conference. In large part, this is due to the spectacular play of Lebron James, but he is not the sole architect behind the Cleveland resurgence.

Timofey Mozgov, standing at 7’1, is the most easily overlooked component in this meteoric ascension to the upper echelon of the conference. The original starting center, Anderson Varejao, ruptured his Achilles on December 23rd. From then until the trade for Mozgov on January 7th, the Cavaliers were forced to play without a true rim protector and they began to tank because of it.

The Cavs reacted by trading for J.R. Smith and Iman Shumpert and then using the draft picks acquired in that trade to strike a deal with Denver for the mammoth Mozgov.

Obviously the acquisition and subsequent stellar play of J.R. Smith could also be cited as a key factor in this revamped Cleveland team, and in fact writer Michael Pina does just that in his column on “Sports on Earth” where he illustrates how Smith’s deadly three-point shooting helps space the floor for Lebron.

According to Pina’s article, 44.3 percent of James’ shots occur in the restricted area when Smith is on the floor, while only 27.9 percent of his shots originate in said area while Smith is getting a breather.

Having said that, Mozgov brings a more impactful skill set to the table. The three point shot and overall offensive spacing are essential components of an efficient attack, but defense wins championships. 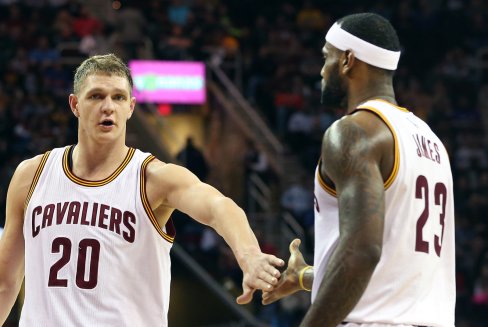 These figures illuminate how the Russian center has provided a stabilizing force for the Cleveland front court that suffered a tremendous setback when Varejao went out on December 23rd. Mozgov is to the Cavaliers what Tyson Chandler was to the Dallas Mavericks’ championship squad in 2010; a tall body who can rebound and coerce opponents into hoisting inaccurate shot attempts.

It remains to be seen whether Mozgov’s talents will result in an NBA championship for the Lebron-led Cavaliers, but his presence has already contributed to a much-needed revamp of their season. We’ve seen this story unfold in the NBA already, where a Lebron James team struggles early, endures the criticism, and preservers through the paranoia to become champions.

I loved “The Office” when I originally saw it, and even though “Parks and Recreation” was eerily similar, I loved it too. If this version of the Miami Heat, playing out in a different city with a different cast, can pull a “Parks and Rec” and be even half as successful as the Miami Heat of 2010-2014, then the adulation of “basketball messiahs” will have been earned and accurately administered.