Buried beneath the Super Bowl, Kentucky basketball and Tiger Woods’ continued struggle to regain any semblance of his former self was the curious story of Diana Taurasi.

Diana Taurasi is arguably the most successful basketball player ever, regardless of gender. She won three consecutive national championships at UConn, three WNBA championships thus far in her professional career and has helped guide Team USA to three consecutive Olympic gold medals. An NBA player with half of this résumé would not only be a household name—like Jordan or Magic Johnson—but also atop the Forbes list of filthy rich people.

Taurasi, however, is going to make more money by not playing this year’s WNBA season. The Russian team (UMMC Ekaterinburg) that she plays for in the offseason has offered her $1.5 million to rest and prepare for the upcoming overseas season rather than assist the Phoenix Mercury defend their championship crown.

Let me repeat that. A foreign team will pay Taurasi more money to rest than an American team will pay her to actually play the game. Currently, the defending WNBA champion pays its superstar guard a measly $107,000. A three-time champion at every level of basketball is making less money annually than Danica Patrick does driving cars in a circle. According to Forbes magazine, Patrick made $13.5 million in earnings last year, which is ninth among all NASCAR drivers, despite finishing in the top 10 only once all year. 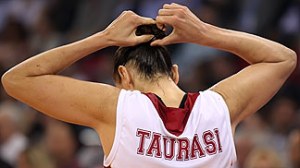 If the WNBA needed a wake-up call, Taurasi’s decision is equal to that of a tornado siren. The WNBA is a cornerstone of David Stern’s legacy, and Adam Silver must find a way to usher it into a state of prosperity. During the 2014 championship season, the Mercury led the WNBA with an average of 9,557 fans per game, yet still are not able to afford Taurasi’s services. This is nothing short of an embarrassment for the league, and finding ways to help women’s basketball thrive should be at the top of Mr. Silver’s agenda.

Handling the debacle that was Donald Sterling’s racially charged tirade was a phenomenal accomplishment for the new commissioner, but pales in comparison to the task of somehow getting the WNBA out of financial hospice and into the sunlight of economic security. Perhaps this can be done by radically changing the rules of the women’s game, similar to how the 3-point line revolutionized basketball as a whole. Perhaps a shorter shot clock could encourage faster-paced possessions and more excitement.

What the WNBA does not need is an exodus of its superstars. It has struggled thus far to garner the attention and adulation of fans, and now it is failing to keep the attention of its players. Change must come, or this may become more than just a drill for the WNBA; it may become a full-fledged disaster.