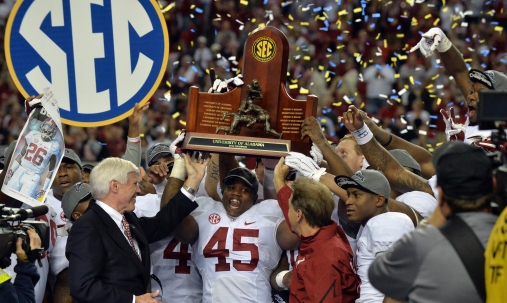 However, two teams find themselves on the outside looking in. No. 5 Baylor (11-1) and No. 6 Texas Christian University (TCU, 11-1) share identical records, compete in the same conference, and both can call themselves the 2014 Big 12 co-champions. Each school will watch as the Southeastern (SEC), Pacific-12 (Pac-12), Atlantic Coastal Conference (ACC), and Big Ten champions battle for a chance to be crowned college football’s best team. 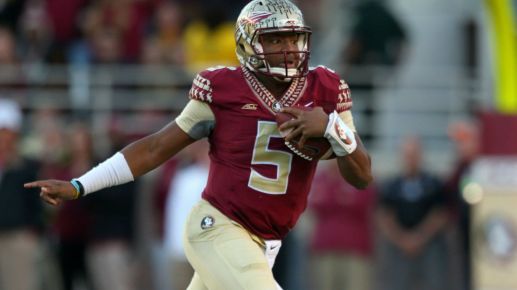 Surely the Big 12 champions will be taking the Jim Mora approach and prefer not to talk about playoffs.

“It’s clear (not having a title game) penalized us,” said Big 12 Commissioner Bob Bowlsby to ESPN.

Before the final playoff rankings, selected by a twelve-member committee, the top six rankings were as follows: No. 1 Alabama, No. 2 Oregon, No. 3 TCU, No. 4 Florida State, No. 5 Ohio State, and No. 6 Baylor. Each team had one more game to convince the playoff committee why they belonged in the top four.

By 12:30 PM Eastern Standard Time, the jury spoke, and the debates began about the verdict.
Alabama and Oregon stayed atop the rankings, which came as little surprise. Despite sloppy play and winning by single digits for the seventh time this season, Florida State finished undefeated for the second straight season with a chance to defend their national championship.The controversy stemmed around who deserved the fourth spot.

“Ohio State demonstrated they were a total team and they did overcome replacing two quarterbacks and that’s a tremendous statement about the quality of their team,” said Committee Chair Jeff Long on ESPN after the committee revealed the rankings.

No. 5 Baylor defeated No. 6 TCU in a shootout at Baylor earlier this season. None of that matters now. Despite an ongoing two-month debate about TCU or Baylor being the better team, the two Texas schools expressed themselves on Twitter, showing heartbreak, resentment, and utter disappointment toward the committee.

Interestingly enough, I correctly predicted the top four teams twenty minutes before the reveal. Yes, they committee got this one correctly. Very little people dispute the fact Alabama, Oregon, and Florida State belong, although some may argue their rankings. However, Ohio State deserves the last spot because they proved time and again they could win, no matter the personnel.

TCU and Baylor had great seasons, and a lack of a conference championship—along with other numerous factors—made the committee’s decision relatively easier to justify placing Ohio State at No. 4.
No. 1 Alabama and No. 4 Ohio State will square off in New Orleans’ Allstate Sugar Bowl while No. 2 Oregon and No. 3 Florida State will face each other in Pasadena’s Rose Bowl presented by Northwestern Mutual. Both games will be played on New Year’s Day.
Despite all this season’s shakeups, the national championship may feature two teams who everyone wanted to compete in last year’s national championship—that is until Auburn spoiled the party for everyone.