As mentioned before in the previous article, “No Type: Contenders vs. Pretenders  Part 1”, there are 3 categories of teams you should know about—the “usual suspects”, “the teams with something to prove”, and the “sleepers”. This article focuses on “the teams with something to prove”. The teams in this category come into this NBA season with baggage. By that, I mean that each of these teams has one or multiple things they need to unpack, or prove before we can truly critique where they fall on the spectrum ranking from contender to pretender. The list is as follows:

Every year it almost feels as if you can write the story for a Clippers season before it even starts.  We all know there will be tons of highlight plays, a solid record, and high hopes and dreams going into the playoffs, ultimately to be beaten by a better team in a long, drawn out series.

The thought process last year was that Doc Rivers was the captain needed to right the Clipper ship. Rivers helped the Clippers maintain the upward tide they have been riding for the past few seasons by getting much improved production from Blake Griffin and Deandre Jordan.

Griffin and Jordan evolved from being two big guys who dunk to being arguably the top big men duo in the league. But, the front court isn’t where the problem exists. The Clippers lost some key players this off season, and in my opinion really didn’t make any solid improvements that make them scream championship contender.

The loss of Darren Collison and Jared Dudley are bigger than they seem, and I’m not sure if the core of J.J. Reddick, Hedo Turkoglu, and Matt Barnes are going to get it done at the small forward position. It is clear that the Clippers want to incorporate the 3 point shot as a full time weapon in the team arsenal. The addition of Spencer Hawes with a healthy Reddick could make that happen.

The Clippers made improvements in defending the rim and crashing the boards through the emergence of DeAndre Jordan.  Under Rivers, Jordan became a solid rim protector at 2.5 blocks per game. But, at the end of the day, this team is built around Chris Paul and Blake Griffin.

Blake Griffin has made leaps and bounds in his game and has a huge amount of potential. He must tap into it if he wants the Clippers to take the next step, because it seems that in the NBA there is a ceiling to how good a team can be when its best all-around player is the point guard.

Personally, I think that Griffin will determine whether or not Chris Paul ever gets that coveted championship ring he has been chasing.  It is time for the Clippers to prove that they are more than just a team of high flyers and that they are truly of the same caliber of the Spurs and OKC.
Honestly though, I feel that they are a still a piece away from proving to the world that they are for real. 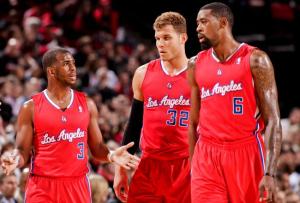 The Warriors have begun the season leaving the media and fans wowed by their team’s play. Steph Curry and Klay Thompson are still the splash brothers and their role players are developing on the daily. The question still remains though, if the Warriors can get over the hump in the stacked Western Conference.

The Warriors have a really good lineup from top to bottom, and have made nice improvements to their bench in the form of Leandro Barbosa and Shaun Livingston. Both players provide energy and scoring at the guard positons.

Draymond Green and Harrison Barnes are the arguably the most intriguing players on the team, because they provide versatility at the forward spots on offense and defense. Both players will find minutes in the rotation due to the depth at the forward positions around the league.

Health is a big factor for the Warriors. David Lee and Andrew Bogut are both injury prone, and the team can go nowhere without the presence of both in the lineup each night—especially Bogut, who serves as a defensive anchor.

Though known for offense, Mark Jackson had the Warriors in the rankings as a top ten defensive team last season—despite its connotation with being offensive minded.

Despite the stacked West, The Warriors have many positives to build upon. The splash brothers are the best backcourt tandem in the league and Klay Thompson is playing very well this year. As of now, he looks like one of the top two guards in the game. His continued development makes it understandable why the Warriors would not move him this summer, even for Kevin Love.

If the Warriors are going to go far, Thompson along with Curry will have to continue to improve their game beyond just the three ball. This is the year I believe we will see Steph Curry take the reigns as one of the best point guards in the game.

If the team can stay healthy they can do great things. Unfortunately though, they are still in the West, and even at peak performance, the Warriors may face teams that can give them matchup problems.  If you use the Spurs game that was played on last Tuesday night as a benchmark, the Warriors are still not quite at championship level.

However, if they remain healthy they could prove a lot of nay sayers wrong. I don’t think they have enough right now due to the depth in the West, but they are definitely on the right track to do great things this season.

The Houston Rockets made big moves before the start of last season by acquiring center Dwight Howard to pair along with James Harden. The move was supposed to lay the foundation for the Rockets to become a championship team for years to come.

While that plan hasn’t quite panned out, the Rockets still enjoyed a decent level of success last year, but they still have much to prove. For starters, I am looking to see whether or not this Dwight Howard, James Harden experiment is enough to win the western conference this year.

Many—myself not included—consider Dwight to be the best big man in the league. James Harden is definitely in the conversation among the top two guards in the league. Therefore, it would seem that the addition of solid role players is what is keeping the team from going where it wants to go.

The only problem is that on paper, the Rockets technically got worse than last season. I expect that the failed attempt to snag Chris Bosh and the lack of desire to keep Chandler Parsons will impair the Rockets this year.

I really like the Trevor Ariza pickup. He brings a strong defensive presence and has proven that he can knock down the three. But, I think the team will ultimately miss the versatile scoring threat that Chandler Parsons served for the Rockets last year.

James Harden is arguably the best one on one player in the league. He always finds a way to get to the rim or obnoxiously flail his arms and get to the free throw line. We know that the Rockets have a formidable starting five, but will that be enough to stand the test of the Wild, Wild, West? I’m not too sure.

Although the Harden and Howard think that their presence is enough, I don’t see the Rockets in the championship conversation until a third piece arrives to alleviate pressure from the Big Two. Thus far the Rockets have been performing well, putting up good fights against formidable opponents.

But, we all know the season is a long one. Come playoff time, I think the lack of depth will be too much and they will end their season in a first or second round playoff exit.