At 5:14pm, just as thousands of University of Georgia students were returning home from a long day of classes, the world pulled the cruelest joke of all time.

From GeorgiaDogs.com:
ATHENS —– University of Georgia tailback Todd Gurley has been indefinitely suspended from competition by the UGA Athletic Association during an ongoing investigation into an alleged violation of NCAA rules.
“I’m obviously very disappointed,” said UGA head football coach Mark Richt. “The important thing for our team is to turn all our attention toward preparation for Missouri.”

In a matter of seconds, ESPN updates, screams, and the sounds of uncontrollable sobbing echoed through the campus. Parents rushed to phones to call their children. Not to ask about the recent Chemistry mid-term, but they asked how is Gurley? What did he do?

According to Bruce Feldman of FoxSports, Gurley, the leading Heisman trophy contender according to the ESPN Heisman Index, is suspended indefinitely due to reports that he “accepted extra benefits for his likeness with memorabilia brokers.”

Immediately, those across the country have drawn comparisons to recent cases including Johnny Manziel, Jameis Winston, and former UGA wide receiver AJ Green.

After an NCAA investigation led to no solid conclusion, the NCAA couldn’t confirm the story. However, Texas A&M and the NCAA both agreed on a half-game suspension for Manziel to start the season.

One week before the Heisman Trophy Ceremony Presentation, the Tallahassee Police Department decided not to charge Winston due to lack of evidence. Throughout this whole ordeal, Winston did not sit out one snap.

This offseason, Winston grabbed headlines again this time for his actions in a local grocery store. According to reports and video surveillance, Winston ordered over $30 of crab legs from a local Publix and left the store without paying for them.

Winston would miss a start for the FSU baseball team, but he faced no punishment from the football department.

When that wasn’t enough, Winston yelled obscene, vulgar language in a FSU Student Union on September 15. After this latest stunt, Winston was suspended for the first half of the Clemson game.

However, after further investigation, Winston omitted certain details of the story. Head coach Jimbo Fisher suspended him for the whole game.

The final case involves former UGA wide receiver AJ Green. In 2010, Green was suspended for selling a bowl jersey for $1,000 to a supposed agent. UGA sat Green in that season’s opener in hopes to appease the NCAA.

Green would be suspended for the next three games as well for a total of four. Green returned that year and performed well earning him a top-5 pick in that year’s NFL Draft.

Now, back to Gurley’s case. The suspension, similar to Green’s case, was handed down by the UGA Athletic Association first, not the NCAA. Georgia, under Richt’s watch, has been a program who has followed NCAA rules strictly.

Since the offseason, Georgia has dismissed four members of its secondary due to a variety of team rules. It seems like Georgia is playing it safe waiting until the NCAA’s investigation is complete.

No. 13 Georgia (4-1, 2-1) came into this season bragging about having the deepest backfield in the country. Now, they have to prove that. Junior Keith Marshall is out with an ankle injury as well as freshman speedster Sony Michel with a shoulder injury.

Georgia will now depend on other freshman tailback Nick Chubb as well as sophomore tailback Brendan Douglas.

We can expect a noticeable drop-off in rushing production from Georgia without Gurley. He leads the South Eastern Conference in yards per game (154.6), yards after contact (365), gains of 10+ yards (27), and rushing touchdowns (8). Additionally, the passing game, or lack there of has Bulldog fans concerned.

Senior quarterback Hudson Mason has only thrown for 137.4 yards per game with 6.8 yards per attempt for seven touchdowns and three interceptions this season.

While these numbers are far from inept, they don’t exactly provide confidence either. Georgia will have their two deep threats back at wide receiver, Justin Scott-Wesley and Malcolm Mitchell, for a second consecutive week which should open the passing game up. 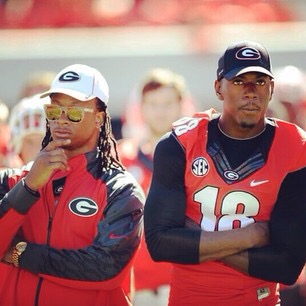 With all that stated, there simply isn’t a replacement for Gurley. He has Georgia’s longest rush, return, and pass this season. The Georgia faithful can only wait until the NCAA finishes their investigation.

Either way, the result will be met with scrutiny. Pandora’s box is wide open. This will open the debate again about if athletes should be paid or allowed to make money off their name.

The NFL’s ineptitude has given the NCAA the perfect distraction, but that time is over. Once agin, the ball is firmly in President Emmert’s court.

No. 13 Georgia will travel to Columbia, MZ this Saturday to take on No. 23 Missouri in a pivotal SEC East showdown on CBS at 12pm.